There is a growing buzz around the potential for insects to be farmed on urban industrial sites and processed as livestock feed in Australia. A growing swarm of interest globally is being replicated locally. 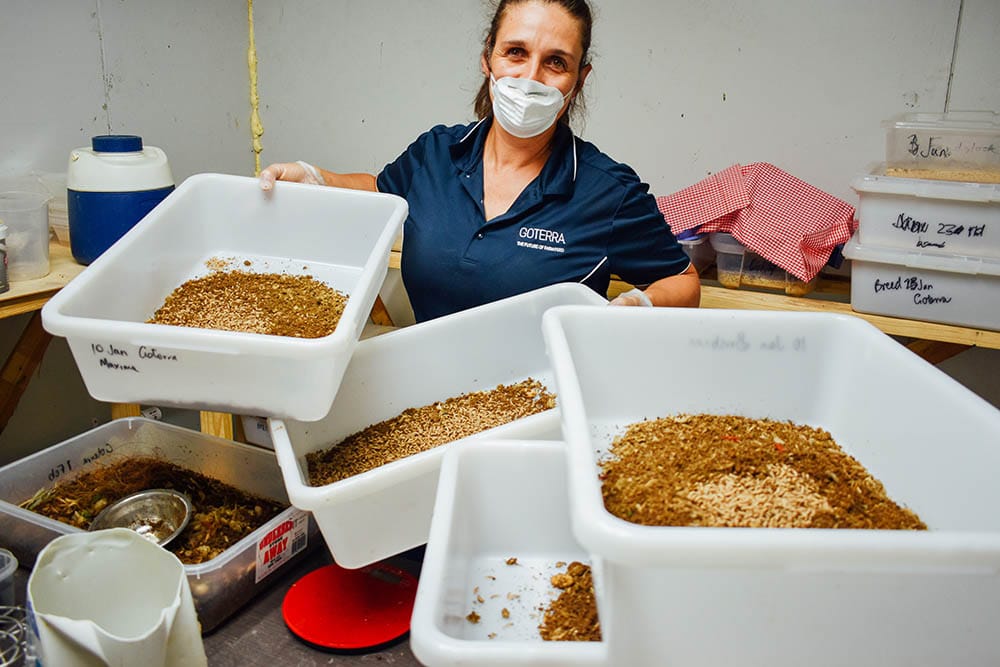 However, for an Australian industry to develop, proponents think there needs to be greater clarity and uniformity in legislation that addresses feeding insect proteins to livestock – at the moment, decisions are made on individual applications, reflecting differences in State, Territory and Federal legislation.

The growth of an insect meal industry is a value stream to biowaste recycling. Costa Rica has apparently been successful in reducing household waste by up to 75%, by feeding it to black soldier fly larvae.

According to OzHarvest, in Australia currently $3,800 worth of groceries each year is wasted per household; or 345kg. That adds up to $20 billion value of food waste annually; more than five million tonnes of food dumped as landfill.

On top of that is agricultural waste in the form of dead animals, eggs that don’t meet commercial grade specifications, effluent from dairies and intensive animal industries. Then there is the commercial green waste industry – trees and lawn clippings utilised by recycling companies, using purpose-bred insects to break down this waste into soil and fertiliser.

Some entrepreneurs have identified insects as ideal to process for stockfeed in intensive animal industries such as farmed fish (in particular, salmon and prawns), poultry and pigs.

It is an industry that is marrying robotic engineers, waste managers, farmers and millers. Currently the world stockfeed market is valued at $490 billion, with feed demand by the poultry industry 45% of that market, followed by pigs at 27%. In the aquaculture industry, raising insects to use as fishmeal adds sustainability to our oceans, if one-quarter of fish stocks currently caught are processed to be fed to farmed fish.

France, Canada and Indonesia have embraced the industry. Ynsect, France, has created a closed-loop automated system that includes farming – reproduction, growth, feeding and sorting the insects; and processing – sterilisation, pressing and drying and packaging. As well as producing aquafeed, pet food and plant fertiliser, another byproduct of farming insects is oil – with some proponents saying it can be processed into a product to use in vehicles.

In 2012, Ynsect built its first test laboratory and processed one kilogram of mealworm powder in that year. A pilot plant followed, producing 12t in 2015 and scaled up to 200t in 2016. This year, Ynsect expects to finish building an industrial plant, to produce 20,000t of mealworm protein powder annually. By 2028, CEO Antoine Hubert expects Ynsect will be operating 15 plants.

In the United Kingdom, Entocycle is artificially breeding soldier fly larvae to recycle café waste, producing soil, fertiliser and larvae processed into protein flour. The organisation operates in the urban environment, producing one tonne of processed larvae daily for the farmed fish and poultry industries.

Enterra, in Canada, is another private business farming black soldier flies, recycling biowaste and producing a larvae meal for the chicken, fish and pet food markets.

Intergovernmental regulations are the challenge to overcome in order for the industry to develop and proceed in Australia, where there is an appetite, especially among urban populations, to reduce landfill and recycle biowaste.

“If raised correctly, insects can be used in stockfeed and in aquafeed. Our challenge is to identify how we can raise them in quantities to produce stockfeed and aquafeed, considering Australia’s biosecurity and contamination risks to industries that are producing food for human consumption,” said Duncan Rowland, executive officer of Stock Feed Manufacturers Council of Australia.

He cautioned about the need to regulate the medium that insects are raised in.

Animal Health Australia’s senior manager biosecurity, Robert Barlow, is part of an industry and government Animal Health Committee task group investigating the current regulations and what changes are required to address industry concerns. The task group includes the State, Territory and Federal Chief Veterinary Officers. Mr Barlow said a lot of the concern was centred on creating an intergovernmental understanding of the industry.

Existing State and Territory legislation addressed prohibited pig feed and banning invertebrates from being fed to ruminants. At issue was the definition of insects within those legislations.

“More research is needed on the implications for food safety and trade of producing insect protein for animal feed from effluent and human food waste,” said a spokesperson for Australia’s Department of Agriculture.

“The process of developing a national policy is in its early stages. Applications for imported product are subject to animal biosecurity considerations on a case by case basis.”

So there needs to be intergovernmental standards for animal health and welfare that enables an industry to develop that recognises the integrity of Australia’s biosecurity. That process is underway. Already, most of Australia’s States and Territories have their own legislation about farming insects to recycle green and household waste.

“We need to have a uniform definition of what constitutes restricted animal material, so we can define the risk.”

Animal Health Australia has been part of the cross-section of industry contributing to that discussion, particularly around defining which insects can be used to make meal and whether they can be used for stock feed, including ruminant stock feed.

“I think within 12 months, we’ll have a regulatory framework established to enable an industry to develop,” Mr Rowland said.

There will be add-ons to the insect meal industry if it develops in Australia, with research and development, breeding, insect feeding, insect nutrition, automation, processing and transport just some of the supporting skills and industries capable of developing.

Because insects can be raised and processed in urban environments, it also raises the question of how much it can replace crops grown on arable land. Rather, Mr Rowland and other proponents believe it will fill an already existing need for stock feed to raise animals and fish, to meet the demand for protein in human diets globally.

“The type of insects we’re looking at are not the ones humans eat,” he said.

“These insects, used to process the waste-stream, are otherwise wasted. They are a protein that can be processed to make stock feed – it’s the logical choice. It also reflects a social view for sustainably producing animal feed and pet food.”

Mr Rowland’s view is shared by Olympia Yarger, founder and CEO of GoTerra in Canberra and chair of the Insect Protein Association of Australia. In 2014, GoTerra began using black soldier flies and mealworms to recycle food and agricultural waste, including effluent from feedlots, dairy and intensive animal industries.

GoTerra places closed-loop modules on customers’ worksites – each of those modules can process a minimum of five tonnes of waste daily. The resulting soil and fertiliser is bought by market gardeners.

The challenge, according to Ms Yarger, is value adding the insect as a protein source – from breeding to processing – in a sustainable business model with a manageable supply chain.

Ms Yarger sees a lot of potential for developing industries around an insect meal resource in Australia – from genetic selection and breeding seed stock to regulating the cross-border movement of insect stock.

“Insects are permissible as feed, but the Insect Protein Association of Australia (IPAA) recommends that insects be not considered for ruminants,” she said.

“We’re domesticating a new species for farming and we’re accelerating that alongside technology, enabling it to be farmed and processed.

“So we need guidelines for breeding and rendering that stock.”

IPAA has developed guidelines to assist members who are using insects to recycle biowaste; and is working alongside Animal Health Australia and its partners to help develop intergovernmental guidelines for breeding, farming and processing insects to be used as livestock meal.

“Australian farmers have done an amazing job developing an agricultural industry with integrity; it’s important we respect that integrity as we develop this industry,” Ms Yarger said.

GoTerra currently provides one tonne per week of insect protein product (dehydrated larvae bred from black soldier flies) for trials including processing the meal, its performance as a feed source and palatability of the product for livestock.