Nick Reid;
This next video in our farmer focus series looks at Mickey Tuhan, a dairy farmer of the Goulburn valley. He took over the family operation a few years ago after having worked for Reid Stockfeeds for 14 years. He is held in high regard by the owners of Reids, Ian and Rosli, and he is also one smart cookie, having passed the Australian Association of Ruminant Nutrition exam.

He’s a humble guy, and I hope you enjoy these insights to his farm.

Michael Tuhan;
[fusion_builder_container hundred_percent=”yes” overflow=”visible”][fusion_builder_row][fusion_builder_column type=”1_1″ background_position=”left top” background_color=”” border_size=”” border_color=”” border_style=”solid” spacing=”yes” background_image=”” background_repeat=”no-repeat” padding=”” margin_top=”0px” margin_bottom=”0px” class=”” id=”” animation_type=”” animation_speed=”0.3″ animation_direction=”left” hide_on_mobile=”no” center_content=”no” min_height=”none”][MUSIC] >> I think I liked dairy from the day I could walk pretty much. I can still remember cows from when I was in pre-school basically. If you talked to Dad, I’d be able to name cows that were on the the farm when I was four.

So I guess I liked cows probably. For some reason, I had some sort of obsession of cows. [LAUGH] And so instead of having other pets cows are generally my pets. I had a little model farm setup with cows galore. I used to pretend to milk them and all that sort of stuff. As you do.

All right so the total herd runs about 160 cows milking at peak and there’s always I guess about 70 odd heifers around the place from calves up until rising two year olds. [SOUND] We run Illawarras and Holsteins. Illawarra started in the early 90s. Before that, we had all Holsteins, but I think now, roughly there’d probably be 60% Illawarras and about 40% Holsteins.

Originally, when I was a kid, I saw a picture of an Illawarra in a cattle breeds book. There’s not all that many in Victoria, so having never seen one, I guess it was a bit of a novelty and thought I pestered my old man continually until he got me one. But once we did we actually buy them we sort of found that their temperament was really good and were really nice cows to work with. So, when you’ve got to milk them twice a day and be amongst them day in day out, it’s really a much easier workplace if you’ve got cows that are easy to work with. We also found they calf really easy as well.

So we were quite astonished at how quickly they’d have a calf compared to the black and whites when we first got them. So that’s another bonus. Have less stress and less hassles if you don’t have to be chasing cows around trying to pull calves out because they can’t have them themselves. There’s a big plus on that side.

I guess it’s a balance. Profits not all about sheer production. You’ve got health costs and fertility. The other side of it, I think, if you get the transition program right prior to calving and you don’t have too many health problems then you end up not losing too many calves from the herd. So I think that is a big contributor to why I’ve always got surplus. Because if you get the transition right, you hardly have any issues, and that’s the biggest time time. Post calving is the biggest time where you lose calves out of the herd with health issues and what not.

Michael Tuhan;
[SOUND] I think the biggest challenge for us, is probably almost getting cows in calf. Fertility seems to be increasingly an issue for everyone. And I guess as cows have produced more and more, there’s more stress on the system and it’s a lot harder to actually get them back in calf than it was when cows were only doing 5,000 litres a year.

I guess it’s the strain on the system. As much as you try and get them balanced as well as you can, it seems to be still a challenge to get them into calf as quickly as you want. So I think fertility probably, in terms of what we can do to increase profitability, fertility probably would be the number one.

No one’s worked out yet ways we can get more cows in calf more quickly. And obviously the amount of energy comes in to that. [BLANK_AUDIO] Back in probably early 2000s, I decided that I would love try to feeding lead feeding. Because probably back then, there was a few people doing it, but it wasn’t as prevalent as it is now. And it took a beat to convince dad that it was something we needed to do as it was an extra job obviously, but it wasn’t long from when we started doing it that he wouldn’t have changed back. Because we just found the cows calved in so much better. I even had less calving difficulties. You get the energy level up and you get the calcium balance right and they just calf a hell of a lot easier. You get less retained placentas. Just so many things less that you have to try and deal with after calving. So maybe it’s another job, but really, you have to go and check them regularly anyway. So if we have some troughs in the paddock, it’s not that much harder to run some grain out into the troughs while you’re down there checking them.

Yeah. So, the transition period, we try to get the cows into the calving, pre-calving paddock or Springer paddock if you like, about 2 weeks before calving. That don’t all calve into their due dates exactly. So, sometimes it’s a week and sometimes it is three weeks, but the aim is usually to try and get them in there for two weeks.

So, they get fed ad-lib cereal hay, and then their lead feed which we use Reid Stockfeeds Springer 16. So we feed Springer 16 in troughs in the paddock, it has anionic salts which obviously helps prevent milk faver, and then I think the key to that, is it also gives them the energy into the diet that if you would just feed them cereal hay by itself, they wouldn’t get.

[BLANK_AUDIO] To be honest, I don’t think raising healthy cows is all that complex. The start of it, is about the environment. If you keep them in a clean bacteria free, stress free environment, then generally, the rest of it will go fairly well. We feed a lot of milk here. Sometimes a lot more than what some of the old school people would have you feed your calves. But a lot of the new research suggests that despite the fact that it will cost you a little bit more to feed quite large volumes of milk to calves, you get your money back when they come back into the herd. We feed lots of milk and then obviously, you still need to get them to eat their grain, because that’s what develops their rumen and we have actually found that the Baby Calf feed from Reid’s, which is a fairly new product has been really good. It’s really palatable, and they get into it fairly quickly. It’s not cheap per bag, but it’s a top end product and at the end of the day, they don’t actually eat big volumes of it. Because we get them started on that and they get eating that and then you can transition them on to an 21% calf mix fairly quickly and they’ll continue eating because they’ve got the taste for it and the appetites their appetite’s there and they know what it is so they just keep eating. [BLANK_AUDIO] So on this farm, we’re about 80% spring calving and 20% autumn. The pasture base on this farm means that spring is a much more ideal time to calve the cows. We do have a reasonable amount of high reliability water on the farm, so we still have a pretty good capability to irrigate and we’re somewhat sheltered from the temporary water trade market.

So the pasture, would make up 55 to 60% of the diet grazed, and then the grain feeding about 1.5 to 1.8 roughly tonnes per cow a year. So that’s roughly around the 25% mark, and then the balance will be high in silage. [BLANK_AUDIO] So in terms of components of milk supply that we concentrate on, it’s really all ties into together. If you’ve got healthy cows and you get the diet right, then the flow should all flow from there. The milk production, obviously, if you’re feeding them right, you get the volume. If there’s sufficient fiber in the diet, then your fat percentage should sort of follow along. And then obviously, protein has a lot to do with the energy value of the diet. 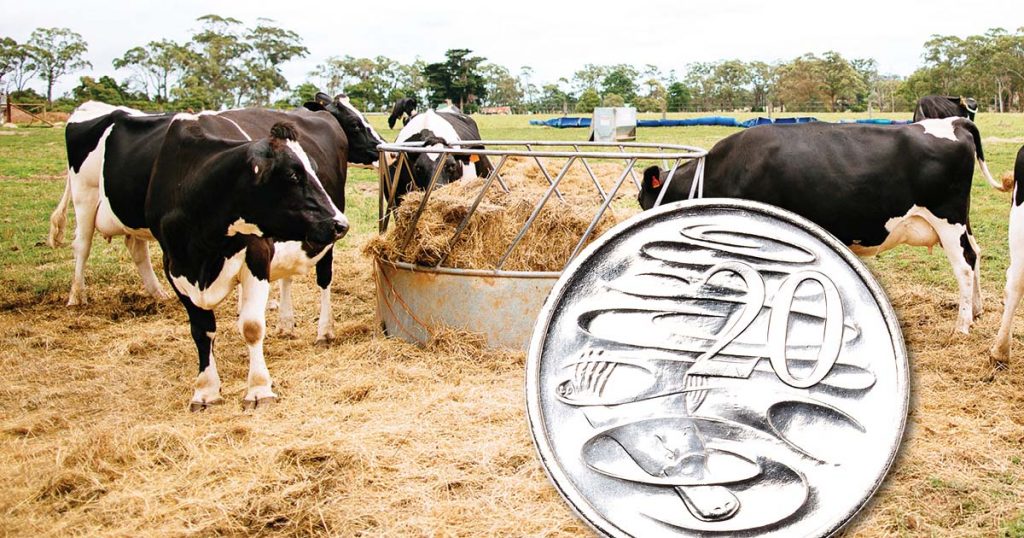